After the emphatic success of the inaugural 'Convoy in the Park' event at Donington in July, the British Truck Racing Championship returns to action next weekend [September 9/10] at Snetterton, with five drivers still in contention for the Division 1 crown. An action-packed nine races will foot the bill in Norfolk, with a near-capacity entry of 28 trucks expected to take to the 2.99 mile circuit across both divisions. Ryan Smith's form in defence of his crown has been sublime 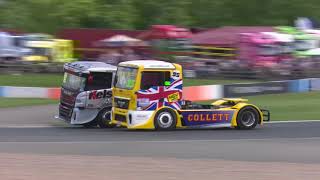 The BTRC Donington "Convoy in the Park" TV programme is now in full length on YouTube!

Check out the provisional timetable for our next truck race and show truck event at Snetterton on the 9th and 10th of September! Show truck bookings via: www.btrc.co/show-truck-entry

Check out the timetable for this weekend's Truck Sport UK demonstration event at Lydden Hill! Come along a get yourself a ride in a race truck! Tickets will be sold in the paddock at the BTRC merchandise van!